The genus Sphinx has 10 species in the USA, and about 29 around the world.

General Information: These are medium to large moths, most have mottled forewings of various coloration. The abdomens often have spotting running down the sides.

2: Forewing evenly brown, often with some black/white streaking. The subterminal area is black… Sphinx kalmiae
2’: Forewing brown but getting much grayer toward the costa giving it a bicolored appearance. The thorax is gray with a hollow brown bell-shaped mark… Sphinx franckii

3: Very large moth, white-gray forewing color with little to no maculation. The forewing is extremely large (<60mm). A rare stray…. Sphinx leucophaeta
3’: Forewing is less than 60mm in length, and otherwise not as above (4)

5: Forewing mostly gray/gray-brown (6)
5’: Forewing gray with darker areas, but always having a light patch from the basal area to the discal area (8)

6: Forewing gray-brown with a black submarginal area. The hindwings are distinctly yellow in males, and more of a creamy yellow in females… Sphinx luscitiosa
6’: Not as above (7)

8: Forewings are distinctly gray with a large dark black area running from apex to basal area of the forewing. The submarginal area is outlined by a white line… Sphinx drupiferarum
8’: Forewings are gray with a darker (not always black) medial area. There is a wavy black subterminal line. The hindwing fringe is checkered black and white and the adjacent area on the wing is dark… Sphinx perelegans

11: Forewing gray with many gray/white/brown dashes. The thorax is overall gray but is outlined in white and the inner section has two black bands bordered on the inside by white. There may be a white streak in the very center of the thorax… Sphinx canadensis
11’: Not as above (12)

14: The black line from the apex of the forewing to the basal area is almost entirely continuous. There are 2 pairs of black lines on the thorax… Sphinx libocedrus
14’: The black wavy submarginal line is highlighted by a white-gray area around it. The forewings may have a purplish tint. Currently all records are from Texas… Sphinx chisoya

15: There is a series of black dashes that runs the forewings from the apex to the base almost in a line. The overall appearance of this moth is a smooth dark gray color. The throax has 2 pairs of black lines on it, though the outermost pair may be quite faint… Sphinx asellus
15’: The straight submarginal line is bordered by a lighter area. The thorax has one pair of thick black lines with a gray region in the middle… Sphinx vashti 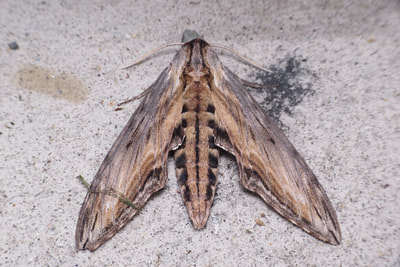 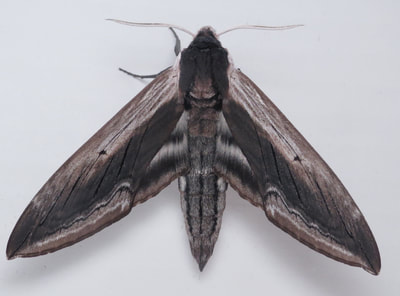 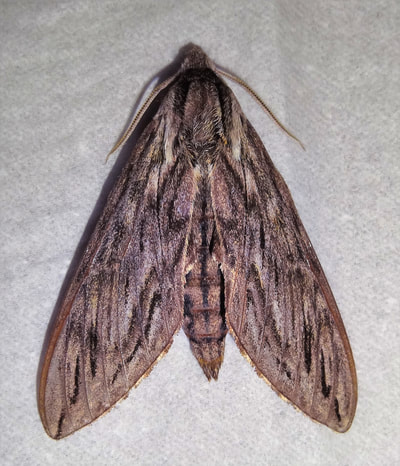 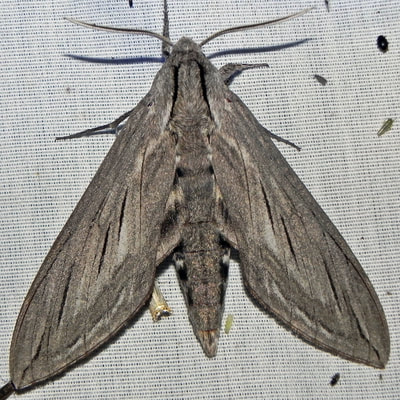 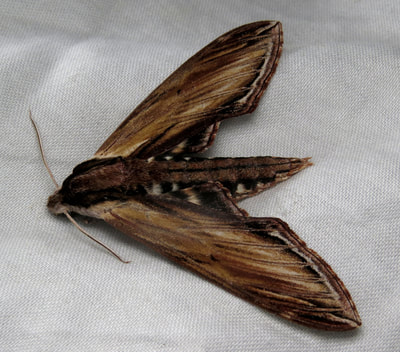